Cathy currently serves on the City Council Central Library Remodel Ad Hoc Committee as well as the Greenway Trail Project Oversight and the Homelessness Ad Hoc Committees.  She is appointed to serve as the City's Alternate Director to the LA County Sanitation District where she serves as the Chair of District Two as well as serving as the alternate to the Gateway Cities Council of Governments.  Additionally, Cathy serves as the City of Whittier's delegate to the Southern California Association of Governments (SCAG).

Members of Cathy's family have lived in Whittier since 1920.  She attended John Greenleaf Whittier and Longfellow Elementary Schools, Dexter and East Whittier Junior High Schools, and graduated from California High School. She received an A.A. Degree from Fullerton College, a B.S. in Dental Hygiene from the University of Missouri at Kansas City, and a Master of Leadership from the University of Southern California. Cathy is an Adjunct Professor at Brandman University in the Department of Business and Professional Studies.  Cathy and her husband, Dave, maintain a Periodontal and Dental Implant practice in East Whittier.  They have seven children and 29 grandchildren. 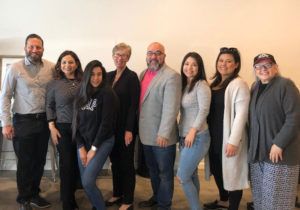